In my previous edition of Butter’s Blog, Part I explored why lawsuits are so expensive. In Part II, we are going to break down the costs of getting your case to trial. To get a rough estimate of what your law firm may spend handling the case,  we must first look at what kind of case it is.

Product liability? You need an engineer. Defective automobile? You need two engineers including a biomechanical engineer to explain why the car wasn’t crashworthy even though it meets or exceeds federal automotive safety standards. Disputed liability in a car wreck? You need an “accident reconstructionist” to evaluate time and distance, taking into account human reaction time and mechanical lag time inherent in the brakes and steering of a motor vehicle.

And then comes the magic trick of turning technical hobble-boggle into actual real speech that humans can understand. I have a pretty good scientific mind and had a GREAT science teacher, Phillip Peterson, in high school. Unfortunately that doesn’t necessarily translate into language that jurors can understand.

A colleague watching one of my cases 20 years ago described my cross-examination of an expert witness as being akin to hearing two people describing the intricacies of the mating calls of bobo birds in several different foreign languages prior to the invention of the Tower of Babel. I think I lost that case. An expert has to not only be knowledgeable in the field, but able to communicate his expertise in a way that makes sense to Uncle Johnny Bob and Aunt Junie. A lawyer working with or against an expert has to be able to do the same thing: take the arcane, and bring it to the level of the mundane, where anybody listening to the testimony can say: “Oh, yeah, now I understand …”

Now here’s another thing about experts. You can spend all that money and get their reports and think you have a case, and then the judge may rule that they can’t testify or their testimony is limited. We have something called the Daubert rule, derived from a U.S. Supreme Court Case, Daubert v. Merrill-Dow Pharmaceuticals. In Daubert (back East they call it doe-bare’, we’uns here in Okie land call it daw’-burt), the Big Supremies decided that judges were more capable than ordinary humans of evaluating the validity of scientific methodologies utilized by expert witnesses. Why, I don’t know.

I think 12 people on a jury are smarter than any lawyer including any judge and certainly smarter than me. But now experts are subject to having their methodologies scrutinized by judges. Only if the methodologies are verifiably valid, may the experts testify to their opinions and conclusions. This has the unfortunate side-effect of once again increasing the costs of cases, because now we have Daubert hearings and Daubert motions; and we have to pay the experts to get ready for those, or even to come from out of state to testify to the judge who will then rule on whether the expert may testify at trial.

What happens if the judge excludes your expert witnesses? You may not have a case. If you need an expert in order to have a case, and the judge decides the expert’s methodology is not scientifically sound, you just lost your case. Bap!! Pow!! Zam!! Blooie!! Rats!! Crumb!! Whoops, there goes a million kilowatt dam. Or non-metaphorically, there goes another $40,000.00 and a client, severely injured, gets zero justice.

The simplest personal-injury jury case requires a minimum of $5000.00 in expenses. If you have a serious injury, you can’t just go and tell the jury you’ve been hurt and have a torn meniscus and had surgery and your medical bills are $7342.12 and your knee still bothers you when it’s cold outside. You have to have a doctor to testify that you had that injury; that in his opinion it was caused by this incident; that your medical bills are reasonable and necessary and related to this trauma; that you recovered well after he performed his medical miracle on you; but you will still have achiness in the knee when it’s cold outside. So where’d that 5000.00 go?

The doctor, by the way, is both a fact witness and an expert witness. He’s a fact witness to the things he observed in the doctor’s office or when he was doing arthroscopic surgery on your knee. He’s an expert when he offers his opinion on diagnosis, cause of injury, and whether the injury is permanent. 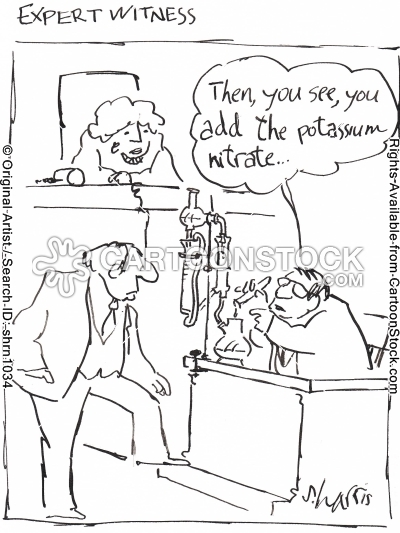 Back around 1988 I found an expert on drilling rig construction for a case we had in which defective design of a rig platform caused a man’s legs to be traumatically amputated. This guy was GREAT. He had patents on new methods of drilling in the Arctic Ocean, a degree in petroleum and mechanical engineering, and had been Vice President for Worldwide Energy Production for Exxon before taking early retirement and setting up his own deep-sea oil production engineering firm. We met in Houston, he dug into the case, his engineering team went to work on it, and he was just personable and fun as he could possibly be. In his deposition things got off track and pretty soon he was telling the defense lawyer the best way to make Louisiana gumbo, in addition to why the rig was defective and unreasonably dangerous.

Then the first bill came: $80,000.00. I kid you not. We weren’t even ready for trial yet. The expert was going to cost us probably $150,000.00 all by himself!! I thought my senior partner was going to have a choke attack. Fortunately we had a federal settlement conference a few weeks later and settled the case for enough money to pay our fees and expenses and reasonably compensate our client — that is, if there is such a thing as reasonable compensation for having both your legs cut off above the knees.

More recently we hired an expert on trucking regulations. Every time he opened the file to remind himself of facts he’d forgotten that he previously knew, we got another bill for, say, $3500.00. Have a conference, review the file, get another bill. Gasp!!! Then the judge ruled against our client on the issue we had hired the expert for. Oh, well, another $35,000.00 down the drain. What the heck, money is the least important thing we all worry the most about.

Well, to quote the wonderful Clifford Bouvette, the exact correct Naval Observatory Time is now approximately twelve o’clock. My friends from Kittson County know what I’m talking about. Time to take a lunch break and take Larry for his walk. See you next time! 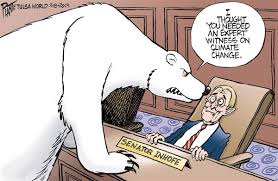 You’d be surprised at how careful good personal injury lawyers are about what cases they take. In general the public thinks that we can take any person with any complaint and get them some of what our governor calls “jackpot justice”. In truth, the economics of our practice and the ethics of our profession require that we only take cases of serious injury that are objectively provable. We as plaintiff’s lawyers most often fund the expenses of our clients’ cases; otherwise they would not have access to the courts because court cases are expensive. However, if we invest in unsuccessful cases, the time and money we put into those cases will be lost.

Just a couple of examples may help. An outstanding trial lawyer here in Oklahoma City once invested $600,000.00 in a medical malpractice case — and lost. Whoa there Nellie!!! That will definitely make you check your hole cards. When I had my own law firm I had $135,000.00 of my firm’s money in a case in which the other side — a Fortune 500 company represented by Oklahoma’s largest law firm — offered my client only $15,000.00 before trial. Yes, I was checking my hole cards, because I didn’t have a whole bunch of extra $135,000.00 bills lying around. Fortunately, we won. (And by the way, my client deserved that victory because the Fortune 500 company had poisoned both him and his land and the lawyer from the tall-building law firm misrepresented the facts to the jury.)

So why do lawsuits cost so much? Three things: experts, depositions, and discovery. In this article, we’re going to talk about expert witnesses. 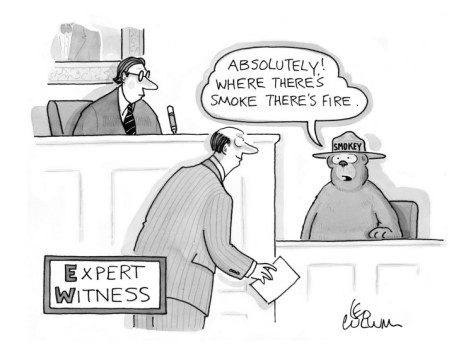 In the law, an expert is a person qualified by education, experience, or training to have knowledge not likely to be held by “ordinary people” — that is, jurors. Experts explain the meaning of facts and offer opinions on how those pertain to the case. Let’s use medical malpractice as an example. You think you have been hurt by the negligence of a doctor, hospital, or nursing home. The doctor failed to diagnose your husband’s cancer. The hospital failed to follow a doctor’s order. Your mom got a devastating septic bedsore from a nursing home’s failure to follow protocols such as cleansing, bathing, and turning the patient. 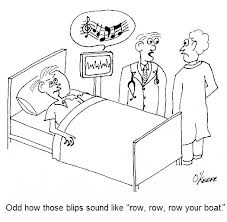 Easy, right? Well, no. Doctors who testify against fellow Oklahoma doctors essentially do not exist. They will line up to support each other, but if they offer opinions critical of their colleagues they are ostracized to Siberia, shunned by their profession, and no longer get the referrals that are the lifeblood of their practice.

So, if you come to me with a claim of medical malpractice, our firm will have to spend a couple thousand dollars to send your records to a “consultant” from out-of-state. If the consultant thinks you have a case, we will then have to find and hire a qualified M.D. from, say, New York or Palo Alto, to be prepared to explain to the jury why your doctor should have recognized that your husband had cancer; and another to show them his odds of survival would have been so much higher if those tests had been performed in 2012 instead of 2014; plus an economist to review your family’s financial records and testify to the “present value” of the loss of financial support of the primary breadwinner in your family. We don’t just pay the experts for their time actually working on the case; we also have to purchase their travel tickets and pay them by the hour for the time they are sleeping in the first-class cabin on the plane to and from Oklahoma City. 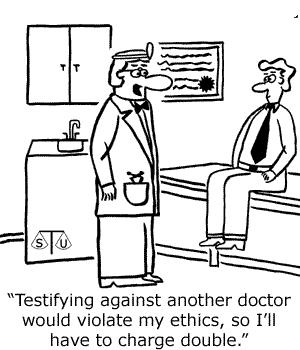 So, by the time we try your case to a jury in Oklahoma County — and don’t forget that 80% of all cases tried against doctors are won by the doctors, nationwide — our firm will have spent $80 – $100,000.00 preparing and trying the case. That’s a lot of investment for a 20% chance of getting a return.

Tune into Butter’s Blog next week for Part II of this series and learn more about the REAL costs behind bringing a case to trial.